In this episode, Mark will show you how to make an animated swarm of bats using a particle emitter. You’ll then control the path of the bats and their birth rate. As a final touch, you’ll add a Vortex behavior to control how they “attack” as a swarm.

In this episode, I’ll show you how to make an animated swarm of bats – or anything else you can think of.
Here I am in Motion, I have a group named background which contains this spooky night shot – let’s close that – and a group named bats.
To make a swarm of bats, I need one bat to start with so I’ll go to the Library, select the Content folder, click the search icon and type “bat”. This movie file, as we can see in the Preview up top, contains a couple of frames of a bat with its wings in different positions (CLICK the .mov file a few times). I’ll select the Bats group and click Apply to add it to the group.
The bat is hard to see against our background image so I’ll temporarily turn off the group, then I’ll select the Project, and in the Inspector under Properties, I’ll change the background color to make the bat really obvious.
When I reselect the bat layer, I can see in the mini-Timeline that it’s a very short movie, and if I play the project, the bat flaps his wings once and disappears. To make a swarm of bats, I’ll move the playhead back home, then I’ll create a particle emitter by clicking this icon down here.
Now when I play, I get a swarm of bats all right, but they don’t spread out very much. Let’s leave the playhead in the middle of the project.
To adjust the emitter, I’ll close the Heads Up Display and go directly to the Emitter Inspector.
First, I”ll change the Shape from a Point to a Line. Now, I can right-click in the Canvas, select the Emitter tool, and adjust the end points of the line to spread across the Canvas and start lower in the frame.
Next, I’ll use the Behaviors shortcut menu to add the Particles > Scale Over Life behavior so that the bats start small – let’s say at 10% – and grow to full size.
If I play that back, they are already looking good, but they are flying up and down from the line, and I only want them to fly up. So with the playhead still in the middle of the project, I’ll reselect the Emitter, and in the Inspector, change the Emission Range to 0 and the Emission Angle to 180 degrees.
While I’m here, I’ll also lower the birth rate to 15 copies per second so there aren’t quite so many bats; increase the Birth Rate Randomness to 10 so they aren’t so uniformly distributed; increase the Speed to 200 so they move faster; increase Speed Randomness to 50 so they fly at different speeds; add Angle Randomness of about 70; and finally add an opacity tag and darken the first tag so that they fade up as they are born.
Let’s see what all those changes look like.
Great. I can also change the randomness by clicking this Generate button.
Now I’ll turn the background back on and play. The bats aren’t quite dark enough so I’ll use the Filters shortcut menu to add Color Correction > Colorize, and drag this black color chip over this beige one to darken them.
That looks great – now after the bats have flown high over us, I want them to come swooping down. So with the playhead in the middle of the project I’ll return to the Behaviors shortcut menu and choose Simulations > Vortex, then press I to trim the In point of the behavior to the playhead.
I’ll click below all the layers to deselect everything and play back – now after the bats rise into the sky, they swarm down to attack!!
click the subscribe button below. If you have an idea, comment or suggestion, leave those below as well. Go to rippletrainging.com for fast professional training on final cut pro, motion and davinci resolve from industry professionals.
Animation Particles
Mark Spencer2020-03-04T20:41:10-07:00 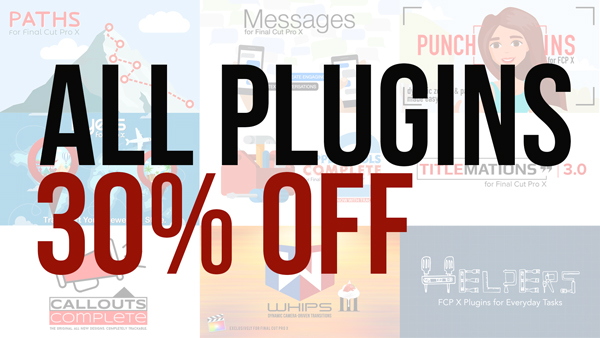